Winter Outlook 2021 to 2022: My Call For Snowfall Opposing Forces Meet In The Middle

The time has come to put it on the line.  After a build up of research reports and anticipation, what do I think will happen this winter?  Will I fall in line with most other forecasters or be an outlier?

No!  I believe the final snow total will be at least a ‘near’ normal winter. It’s weird to even think that is the rare high end this year. Forgive me for a lot of info here, but I want to share what goes into my thinking,

So, why even do this?

Us weather people get a bad rap for forecasting just a few days away, so imagine the thoughts for an entire season.

But we humans like to look ahead, and it’s not just about the weather.

Some financial pundits said inflation was short term, and we know it’s not. I realize the higher cost of energy does take away from some of the fun and love for a cold and snowy winter, when it will cost more money to stay warm.

The ‘experts’ are still on TV or only with their daily stock picks, and people listen.

Even news pundits are already talking about the election… which is a full year away!

Football analysts do it weekly as well.  Do you remember when The Kansas City Chiefs were expected to win the Super Bowl this season?  How about ALL of the TV guys saying Mahomes was better than Lamar Jackson and would beat him in September?  We know how that ended up.

Then, just last night, the Ravens were expected to walk over the Dolphins in an easy win. People on TV almost unanimously agreed. But they lost.  It turned out to be a ‘Trap’ game.

So as for my ‘two cents’ are for potential. I will hold myself accountable, but it is more a game. Not my main objective. That is more short forecasting to keep you aware and help you prepare.

Personally, I believe this winter may very well be a ‘trap’ as well highlighted by La Nina luring us into ‘thinking’ this will be another mild season. I’d rather think we will wake up to more mornings like this one Alison Decker showed us from Baltimore County last winter. 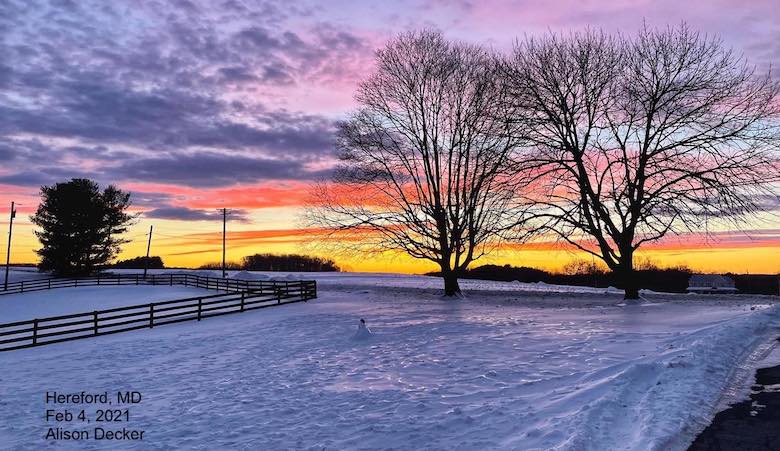 I recently shared my track record for last winter along with my record over the last 8 years.  I did miss the overall total snow. It was about half of my call!  However, I was pretty close calling the timing of events AND the ‘pulse’ of events clustered in February. So regardless of the large look ahead, we truthfully are be better suited for the individual events.

I have failed and also had stellar winters before. I strive to bring back the ‘stellar’ this time!

Links that report and other research are at the bottom of this post.

I need to share the main information to explain the reason for my call. But you can jump to the bottom if you just want that.

I’ve written quite a few reports about signals for the winter ahead.  If there was one that was perfect, this would be easy. But there have been opposing forces:

Warmer and Less Snow Than Average

Most local forecasters on TV and online re going with below normal snow.  There are too many to mention here, but I am sure you have already read something from your favorites.

With all due respect, we had a saying back at Cornell: “If you get four meteorologists in a room, you will end up with five different forecasts”.  That fifth one may be the best…. My call here is just another one to add to the overall mix.  But it is my scientific interpretation.

Went warmer with a suggestion of less snow mostly based in the La Nina pattern.

“Usually” warmer and less snow.  However we have had one recent blockbuster winter in 1996.

65% of winter are warmer

*Could this be based on intensity and location of that water in the Pacific?

*This is the second winter in a row, but the location and intensity of the cool water is NOT the same as last year.

January 1996 Blizzard was in a La Nina winter and resulted in the 2nd highest seasonal total of 62.5 inches.

Fast building snowpack between China, Siberia and Canada. That is the sourcing of our cold air.

This upper air pattern is in the Stratosphere.

When this is Negative during a Moderate La Nina we tend to  get more snow.

As of now (mid November) the Index = -1.18, That is Negative or in the Easterly Phase In my research of the last 50 years, I noticed that there was an above normal snowfall winter associated with a new solar cycle. This usually was a lag of about 1 or 2 years after the solar minimum, but one time at the minimum itself. It has happened each time since 1964.

See the full report on Solar Cycle and Winter Snowfall I wrote an article showing 3 out of 4 different publications went for a near to above normal snow.

Is this scientific? Perhaps… We don’t know their methods.

Why does this matter? Because people still buy the books and mention them every winter when we do get a storm.

There are many elements that have been brought to my attention leaning towards more snow. Does this matter? Well, people have been looking for signs in nature long before computers and satellites helped us.  Maybe the excessive acorns, location of wasps nests, thickness of skin on produce mean something.

Perhaps even the latest Lady Bug invasions is them trying to tell us something?

As for the Wooly Bear Caterpillars… I’ve seen photos spanning the spectrum of colors. So this my be more subjective. We have historically had a big storm over 10 inches or snow at BWI every 3 to 4 years since the 1970s.

This has not happened since 2016, six winters ago. That storm was the bulk of the snow the entire winter.

Did we break the pattern or are we overdue?

One good storm can break it wide open, and I give the odds on that at 50%. A cluster of storms can make a season in a short time. A very busy year in the Atlantic and one thing stands out:

Larry and Sam both made it to the North Atlantic. This helps to redistribute heat on our planet and warm water.  I feel this will help with more North Atlantic Blocking or -NAO patterns to support cold air for us. We had two Nor’easters including this retrograding storm  Oct 26-30.

The helped with high flooding on the Bay and shoreline.

This location suggests we may see a few Large Nor’easters, but too far off the coast.

However, all we need is the right blocking to our north to bring one of those back close enough for impact. I really believe the odds favor us getting in on at least one of those significant coastal events this winter. My Call For Snowfall:

With this tug of warm, I do believe the energy will be present to give us a good chance to get

‘at least’ get a near normal winter.

My Forecast for Baltimore at BWI What could go wrong:

Less:  If we get a classic La Nina, the snow total will be lower, but I have a hard time thinking less than last winter.

More: If we get one or two blockbuster coastal… or a cluster of storms, we could easily exceed this mark in a hurry as we have seen in the past. Metro Baltimore, Washington, and along I-95:

This range allows for variations with the region as we often see with individual events.

Since this is away from the water and colder in higher elevation, some earlier season snows are more possible here.

We have already seen samples of this, but there is more northern blocking to suggest more cold air.

The North Pacific Oscillation is important because La Nina is located in the Pacific and will be a driving force.  This PDO is Negative and tends to drive colder air to the Eastern US.

The QBO is negative and also historically associated with a cold pattern for the winter.

We need to watch for the MJO to get back to phase 1 or 8.

If we get a classic La Nina influence, then it will be January. That may be busy with storms, that may tend to cut west and warmer, or redevelop (Miller B) off of the coast and leave us dry slotted.

We typically get our most active pattern and best storm chances in February.

This winter it may have support with a fading La Nina. If that is the case, the other forces like a -QBO and -MJO, plus Ural Blocking could play a later role.

It will be a very busy winter, but not all storms impact us the same way.

The La Nina pattern will result in storms that: