For the second year in a row, the tropical Pacific Ocean has developed a large region of cooler water. However, that does NOT always mean the same result. Especially when we compare the actual plot of cool water now to last year, we can see cool water covers a larger area. This patten called La Nina can play a big role in our winter outlook for snow.

Water Temperatures Below The Surface

The animation here is between August 11 and October 5. It shows the measured cool water below the surface of the Pacific along the Equator.

The blue shows the cooler than average water temperatures.

We also had a La Nina last year.  With this being a second in a row, it is called a Double Dip.  This is actually quite common, happening about 2/3 of the time.

NOAA research has determined of the 12 first-year La Niña events on record, 8 were followed by La Niña the next winter, 2 by neutral, and 2 by El Niño.

The storm pattern from the Pacific Ocean Can shift dramatically with each event.  The jet stream brings many weather systems from west to east, but not all of them. There are other winter storms that will not be influenced by this, but many will. Not The Same As Last Year

Before we get into what a ‘typical’ La Nina can bring this winter, let’s compare the temperatures plots.

Besides the coverage of the water along the equator, what jumps out to me is the pocket of cooler water surrounding Hawaii and extending to southern California. The argument can be made that this will be a stronger La Nina, into the ‘Moderate’ range.  The difference is highlighted below. 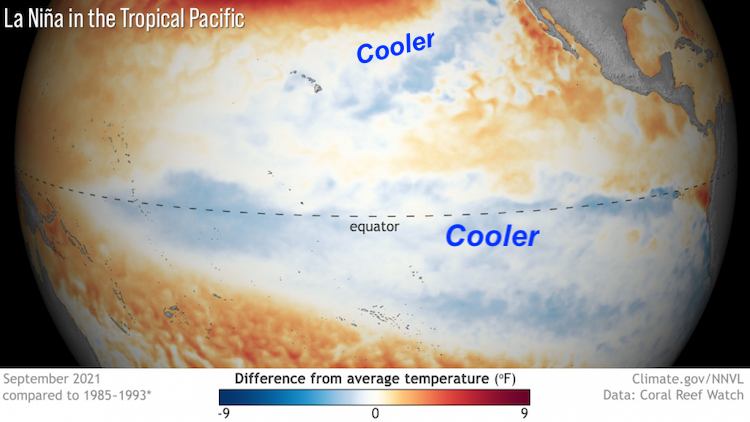 My take on this…

Winter will start with moderate La Nina conditions, then trend to neutral by the end of winter.

This can play a role in the type of storm patten we get that will change between December to March.

What La Nina Can Bring In Winter

The storm track from the Pacific Ocean is directed where Blocking High Pressure sets up. This can tend to take a northern route, diving across the central plains, then up the Ohio Valley.

I want to emphasize that this is the NOAA map for a ‘typical La Nina’ storm pattern. It is not static for the entire season.

I put the yellow box over the Mid Atlantic. We are in a region that can be on the edge of the storm track.  There are other factors that can shift this south and colder for us, or west and warmer.

It is possible to average a warm pattern, and still get a few strong cold storms.

I’ve highlighted our Mid Atlantic region in the black box.

Look closer (zoom in) and see central Maryland in white. Overall near or slightly above average. Look closer (zoom in) and see central Maryland 2 to 3 inches below average. Baltimore: For simplicity in our region here is a look at the records in this location

This data does not support a snowy winter. The caveat is that this is only from 1950 to 2017.  There are quality weather records back to 1882. But the La Nina years historically need more extrapolation, since that pattern was not thoroughly studied by scientists

However, within this data there are exceptions and other factors that may not have teamed up together before. I will continue to explore them for my formal outlook.

La Ninas are not all the same. The intensity ‘weak’, ‘moderate’, and ‘strong’ can yield different results for our region.

Reminder: That plots of cool water shown above were not the same last year as they are now.  That can shift where the pattern sets up.

Warmer than normal 65% of the La Nina Winters.

*If you want a cold winter, root on a moderate intensity La Nina

Last Winter Comparison (not on the chart). This is total precipitation for rain and snow.

Overall there is an even split. But this chart can be confusing. A Moderate La Nina has had 4 of 6 times been below average, but the chart has the largest total. This is because when there is an above average pattern, it can be WAY ABOVE AVERAGE to offset the total comparison. If you have Faith in the Flakes, this might not be what you want to see. But there is a silver lining. While most years show below normal snow, there have been some big exceptions.

*If you want a snowy winter, root on a moderate intensity La Nina.

Last Winter Comparison (not on the chart).

That warm month of January still brought 4.3” snow. But that was 2 inches below average. If my suggestion plays out, then we could have moderate La Nina resulting in a near normal snow to start winter.  As La Nina gets weaker, mid winter may be mild and less snowy. Then a neutral end to winter will be open season for other global patterns to influence our storm track.

This is NOT the only factor for out weather pattern.   I will be identifying others in my Winter Outlook Series before sharing my formal call for winter snowfall.

Also: For the first time in a decade, I purchased a season pass to local ski areas for my son and myself.  I have #FITF

Please make sure you sign up (above or click here to sign up for email alerts…. ) for my newsletter. This way you will get an email to make sure you are notified with each new post.