Today is our storm day. Forgive me for making this personal, but today is my son’s 16th birthday. It was 10 years ago that he came up with the idea of Kid Weather, so this is an appropriate celebration.  At least the storm and the holiday weekend will delay his drivers permit just a little.

The winter storm that will move in to our region had arctic air that has helped establish a cold ground. When it begins it will easily stick, and and come down heavy in a hurry.

The specifics of the event are highlighted below. Timing is key! It will snow for a few hours. Very cold start with most in the teens, and a few single digits. This has sufficiently chilled the roads ahead to the snow later. Before the snow arrives, roads will remain cold! *In my next report I will post a comparison of change over timing across the models. Consider a buffer of 1 to 2 hours form this forecast.

This is why warmer air will be taking over AND the expectation for flooding. Winds will be pushing/sloshing Bay water to the western Shore. This will impact Havre de Grace to Baltimore and Annapolis!

This may also knock out power for places with a few inches of snow  caked with ice as well. This is similar to my initial call. I adjusted the top end down an inch, simply because of the faster change over.

Mountains: There will be spots that could get over 10 inches, but there will be mixing of sleet that will could push even into Garrett County at times. Temps will push the 40s in the cities overnight, then cool back down by sunrise. Nearly steady temps into the afternoon. Looking Ahead: Thursday to Next Saturday

There may be another storm next weekend

Mid week will be mild. We can explore the next potential storm closer after this first one passes. 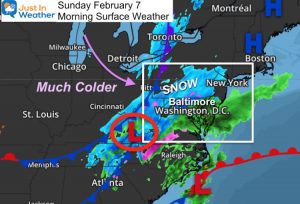