Happy Father’s Day!  This will be a brief report since I am heading out with my boys to go kayaking on the Northern Chesapeake Bay.  It may be a bit windy for us, and for you… again. We are in a pattern that is unusual formed June.  In fact, it has brought snow to parts of Northern New England.

We have carved out this unseasonably cool airmass.  It can’t last forever, but there has been some indication that it may be trying to hang on longer…

High Pressure directing this airmass is located in Ontario Canada. Low Pressure near Nova Scotia has combined to funnel the winds our way… but it’s better than the chilly rain near Boston and snow that fell over Mount Washington, NH and across northern Maine. 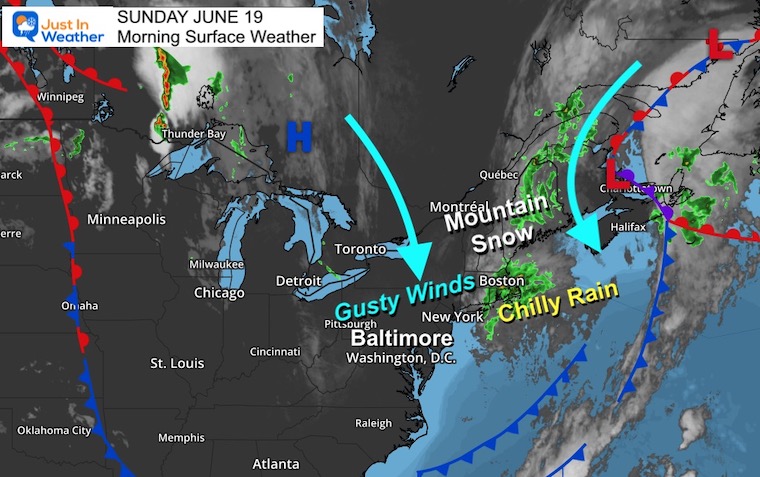 View From Mount Washington – This is Really June 19

Lows dropped into the 40s in the mountains, with many 50s including metro Baltimore and Washington. The 60s were confined to Bay locations near and south of Annapolis. Remaining pleasantly cool, but chilly in the shade. Wind Forecast Animation 8 AM to 8 PM

Peak winds may reach over 30 mph, so it the water will be choppy in the Bay.

I am heading out to kayak with my boys on the Northern Chesapeake Bay.  I will let you know how the wind treats us. Looking Ahead: Tuesday to Thursday

An abrupt change has been seen on the GFS Model starting Wednesday. Instead of building high heat as we saw in yesterday’s prognostication, now it appears too bring in a trough back from the Atlantic… Resulting in a band rain on Wednesday which would result in much cooler temps.

This is a little more tame, but showed a similar (back up) from the Atlantic. We can watch this display of a broad Low Pressure move backwards (retrograde) towards the North and South Carolina coast.

This would push the heat back into the central US and bring us a much cooler set up for the second half of the work week.

I left Wednesday and Thursday as ‘Questionable’ simply to see of this ‘retrograding pattern’ holds over the next two model runs.